“Inside the boat it was very creepy. I kept hearing knocking and possible mice. I didn’t sleep very well that night!” Pioneer Pauly Sneaks onto Shawn Pomrenke’s Mega Dredge 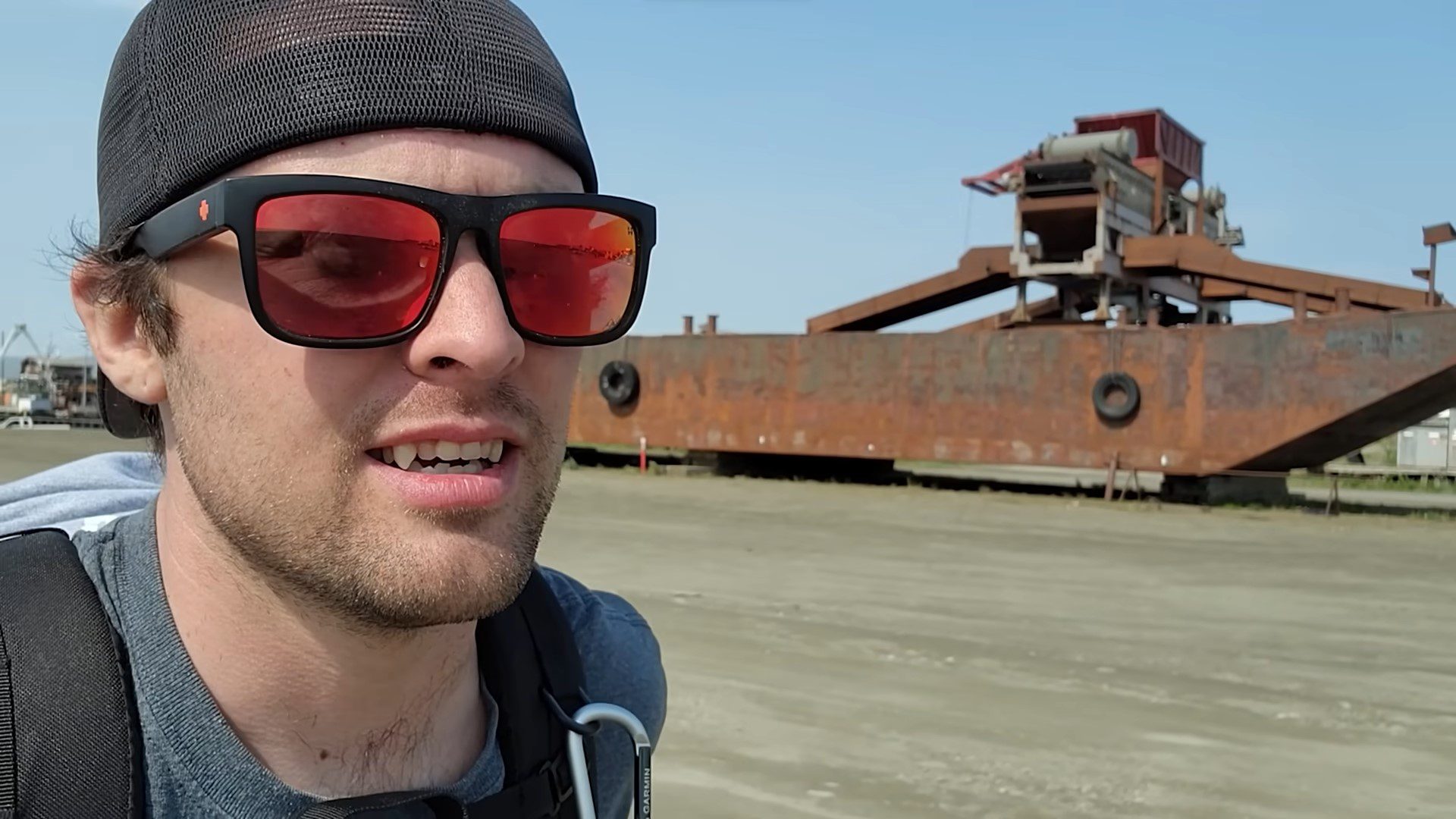 Bering Sea Gold has been teasing us with the massive barge for almost a decade. Mr. Gold has been talking about how the Mega-Dredge is going to be largest gold dredge on the Bering Sea for even longer than that.

Then Shawn threw almost half a million dollars into rebuilding the Myrtle Irene and the Mega Dredge seemed to be forgotten. We never even got the chance to really see it!

Want to know Shawn’s plans for the Mega Dredge? Don’t miss our Exclusive 2022 Interview with Mr. Gold about the fate of the project!

Now you can finally see it up close and personal, because adventurous Youtuber and friend of the site Pioneer Pauly snuck onto the Mega Dredge this past summer and spent the night! And he filmed it!

“I was between places while in Nome this summer and everything was booked. I looked towards the beach and there was the Mega Dredge, just sitting there, and I thought, why not?”

The Mega Dredge sits on a well-used part of the Nome beach with cars and trucks driving right next to it on the hard packed sand. So Pauly had to get a bit sneaky because of all the potential eyeballs on his clandestine activities.

Though, there really isn’t a good time to be sneaky in Nome in the summer. The sun is up for over 23 hours, never setting and people are out all day and night. There are even people sleeping right on the beach as Pauly points out in his video.

Eventually, he just made a run for it and scaled up the side of the massive dredge as easy as a cat scaling up a freshly decorated Christmas tree.

The Youtuber explained his cat-like climbing abilities to me in an exclusive interview with Bering Sea Paydirt.

“Having ADHD, I’ve always climbed on stuff. When I was around 4, I would get in trouble for climbing on top of the freezer.  Then when I moved to Vancouver, I did stunts for the film industry and really got into bouldering, so scaling Shawn’s Mega Dredge was easy.”

Once he made it up Pauly was surprised that there were no gunwales to hide behind, and that he was completely exposed on the flat deck!

The confusion mixed with slight panic in his voice shows he’s really uncomfortable being so exposed for anyone to see him walking around up there. The last thing he wants is for the police or even worse, Shawn Pomrenke, to find him.

“I wish I filmed more of the project when I was on the main deck,” he said “There was so much to look at but I was too worried about getting arrested.”

This spooked him enough to look for a more private spot to get some shut eye. He found an open hatch on the main deck and climbed down into an incredibly scary looking hole.

Learn to pan gold at home!

We know where it’s from, because we sucked it up the nozzle ourselves.

“Inside the boat it was very creepy. I kept hearing knocking and possible mice. I didn’t sleep very well that night,” Pauly recounted. “I kept thinking a mouse was going to crawl on me!”

The next morning he climbed down just as fast as he climbed up the night before.

When asked if he would ever do it again, Pauly told me, “I actually saw Shawn a few nights later in town. When I told him I spent the night on his Mega Dredge, he just laughed, he thought it was funny but told me he’d shoot me if he saw me up there again. I wasn’t sure if he was joking about that or not. I think he was joking, I hope he was.”

Next time I’d make sure you ask Shawn first, just in case he wasn’t joking. Mr. Gold is pretty protective of what’s his.

If you haven’t been to the Pioneer Pauly Youtube channel you should check it out. He has over 100 videos of his treasure hunting adventures like gold sniping and prospecting.

One of our favorites is when he found 2 gold nuggets worth over $450 in a river by his house!