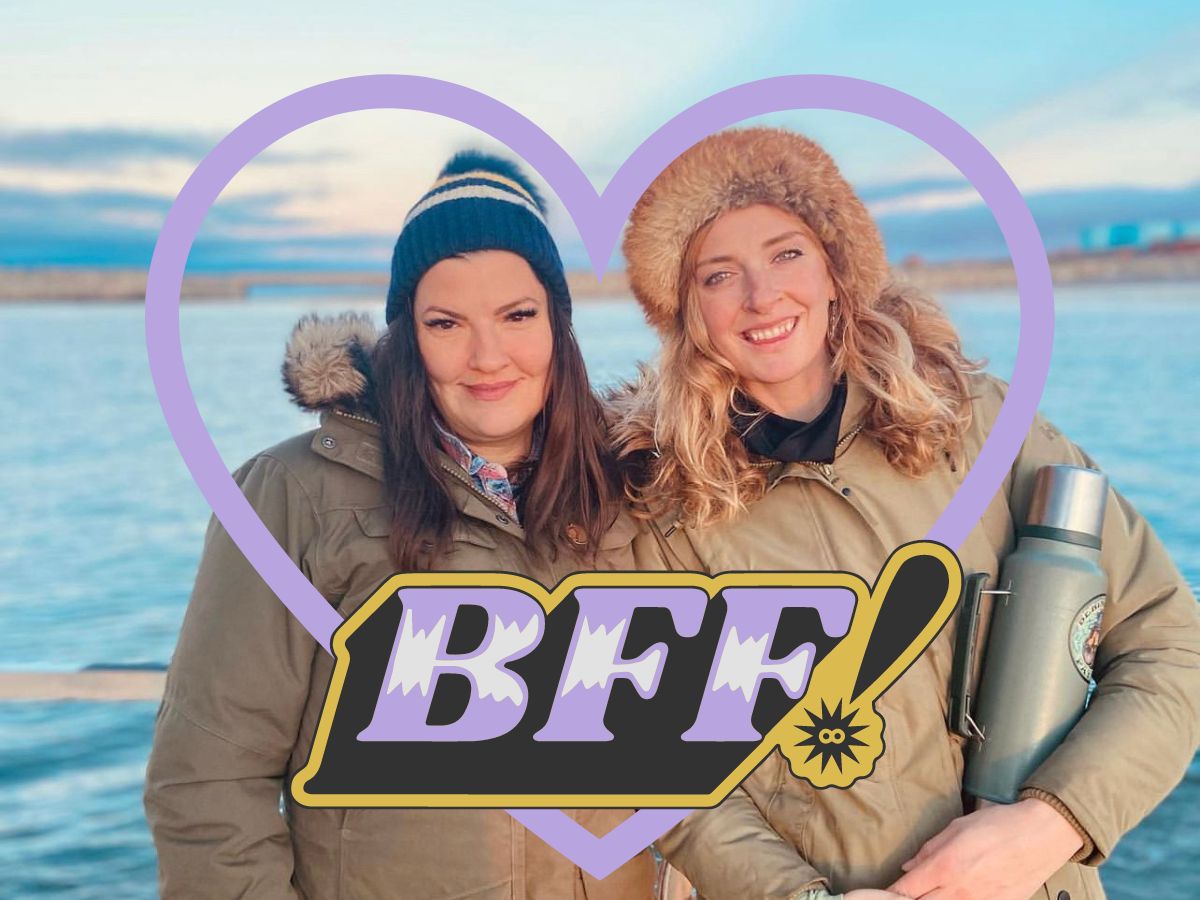 When my good friend first showed up on my dredge in Season 15 a lot of folks asked “Why is Jane Kilcher on Bering Sea Gold?”

I grew up just a few miles from the homestead. We both had homes overlooking Kachemak Bay, and the beach was our front yard, full of delicious mussels to eat, and endless wilderness to explore.

Homer, Alaska is a small town where families tend to stay and thrive over generations, which means our families have a surprisingly long history together.

It seems inevitable that Jane Kilcher and I would become friends.

And when I got pregnant with my daughter Evie in 2021 I needed someone I could trust to help me manage the dredge, who also wasn’t afraid to be in front of reality tv cameras. And Jane was the perfect fit.

Here’s our exclusive interview with Jane about her experiences in Nome and on her own television show. After you watch this, read on to hear my story about growing up in the same small town as the Kilchers.

There’s a strong strand of “Alaskan hippie homesteader” here in Homer. While the Riedels aren’t homesteaders, we share something of the same sourdough-baking-artist-in-the-Last-Frontier DNA with the Kilchers.

Our respective family bloodlines tend to create natural-born performers, with multiple reality television stars and professional musicians (most of them gig, one of them is Jewel) in each.

Off-shooting that are strengths in craftsmanship and the visual arts. Beside playing the heck out of a guitar, my brother Paul and Atz Lee are two of the most talented finish carpenters in town. There are several talented painters and designers in both families.

Both of our families are committed to healthy, natural lifestyles. My dad and Atz Sr., for example, are both seniors in great shape.

My husband – a strong guy – once lost a pull-up contest against the 70+ year old Atz Sr. after interviewing him on the same podcast where we met. Likewise, my dad Steve lives an active lifestyle and could pass for 20 years younger than his age if he shaved that crazy beard.

Both families tend to produce people with a flair for the dramatic and the tendency to wear our hearts on our sleeves. It’s not hard to see how we were fertile ground for reality television cameras.

Of all the many shared interests between our families, music is the most important.

Imagine a small Texas town’s commitment to its high school football program a la Friday Night Lights. Homer is like that, but for music.

To locals, becoming a national television star isn’t nearly as big a deal as being able to play a killer live performance. After all, everyone in Alaska and their brother has been on a reality tv show, but only a select few are good enough to perform at the annual Salmonfest music festival.

My love of singing and music was fostered in this environment. Growing up around such a strong musical culture (and with favorable musical genetics) eventually led me to perform at Carnegie Hall in New York.

It might surprise you that Jane’s father-in-law Atz Sr. had an early impact on my musical career, because he was my music teacher in elementary school. He used to play Jewel’s albums for us in class, and is one of the mainstays of the tight-knit music scene in Homer.

Here’s a performance by Atz Sr. and Jewel playing the theme song to Alaska: The Last Frontier.

Speaking of Jewel, my mom Anni used to play the piano for some of her performances before she got big. Anni was a well-known musician around town back when she still lived here. She was a one-woman act who could pick up any instrument in the world and play it with her hands and feet. She had a hand in just about every local musical performance.

Atz Lee must have caught the music bug from his father, because I knew him best for playing performances around town. Check out this awesome performance by him and Nikos in Milwaukee a few years back.

So naturally, when I found out he had married a classical pianist, I was very interested in meeting her with the hope that we could play music together.

Just listen to her play the piano with Atz Lee at Kharacters! I love this performance. It’s such a hidden gem.

I finally met Jane one night out soon after both of our shows aired, wildly, 30 days apart. Alaska: The Last Frontier aired on Discovery Channel on December 29, 2011 and Bering Sea Gold a month later on January 27, 2012.

I asked her to jam with me and we’ve been friends ever since.

We tell the story in this video.

Reality tv and gold mining are both crazy businesses and Jane’s someone you want in your corner for both.

In the world of tv she’s always had my back. It’s a strange business we’re in, and teaming up like we have can be tough to navigate. There’s a lot of ego and attention involved in the business, but Jane’s always made it easy and fun to work together.

She keeps things light and silly even when Nome is dark and stressful, and is ready to jump into the thick of whatever wild situation happens on the Eroica. More than once I’ve been glad to have her onboard when things have gotten hairy.

Jane is generous and thoughtful, too. Anytime she comes back to Nome after being out of town for a break she always brings gifts for my daughter Evie. And she threw a combo bachelor/bachelorette party on the homestead for us and spoiled us with oysters and other Alaskan delicacies.

Today I’m proud to call Jane a friend and a crew mate. If you’re reading this, Jane, I love you!